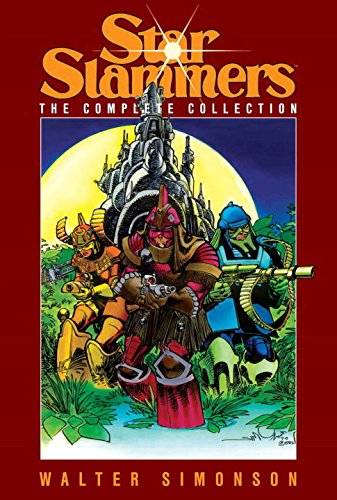 Before Walter Simonson's work with Marvel and DC, there was Star Slammers, a series first devised by Simonson during his college days. The Slammers would later be resurrected as a Marvel graphic novel, and then a miniseries. Simonson describes it thus: "Once upon a time, there was a race of men who could out-shoot, out-fight, and out-kill anybody. They were paid fabulous sums to act as mercenaries. The practice became so lucrative, they decided to go into business. They became the most successful businessmen in history, and they called themselves...The Star Slammers!" The collected Star Slammers also features, published here for the very first time, Simonson's earliest version of the Slammers created for his college thesis at the Rhode Islandhool of Design. These stories predate his first professional comics work but strongly show the artist's keen sense of composition and design.


Over the course of his career, Walter Simonson has written and drawn nearly every major character from both Marvel and DC Comics. Notable works include an adaptation of Alien, once again with his Manhunter collaborator and close friend, Archie Goodwin, Star Wars, The Fantastic Four, Orion and Elric. In the 1980s and 1990s Simonson resurrected the concepts from his college thesis, creating an original graphic novel and miniseries featuring the Star Slammers. In 2014 Simonson launched Ragnarok with IDW Publishing, a creator-owned series that once again brings him back to his beloved Norse mythology.